Since the end of the 12th century, a village has been built all around the convent buildings protected by a wall, punctuated by towers and bordered by a ditch: this is called the monastic enclosure. Endowed with a treasure trove of relics (Saints Prime and Felicien), and although it suffered from lay lusts, the abbey experienced a spectacular boom that allowed the development of a pilgrimage course. Beaulieu became an essential stop on the paths of Santiago unifying Limoges to Aurillac and Figeac, leading to Conques, Moissac, Toulouse and then Compostela.
The city grew richer and new quarters were built around the wall. As in many cities in France, the prosperity and relative security of the late 17th and early 18th centuries led Beaulieu to destroy the medieval walls that had become obsolete. The space left free by this demolition, in the heart of the city, was courted by noble and bourgeois families wishing to settle as close as possible to the abbey. Thus was born the boulevard of St. Rodolphe of Turenne, following precisely the circular shape of the rampart. The gardens were built on the filled ditches.
The very old family of the Clares, lords of Peyrissac, owned its main houses in the perimeter close to ours. In fact, our house belonged before 1789 to a miss Clare married to a bourgeois named Labrousse. On St. Catherine Street, the house has a rough and old-fashioned appearance; it is probably the one that Etienne Carbonnière, a priest, and his brother Giraud gave in 1507 as collateral to the abbey for sums due for burial in the monastery grounds. Before ending up in 1598 with the Clare family, it had belonged to the Dauvis family. This building is adjacent to the only gate of Beaulieu having retained the appearance of a fortified city gate (14th century), current St. Catherine’s Gate, formerly known as the Molye or the Tournel, opening onto the del Grave. In the middle of the 19th century, house and door passed to the family Mazeyrac then Bouyssonie, who undertook work on the fashionrrnization at the beginning of the Second Empire, as evidenced by the date 1851 inscribed on the railing of the terrace. Coming from this family, Amédée and Jean, both priests, and their brother Paul became known when on August 3, 1908, in the commune of La- Chapelle-aux-Saints, they discovered in a cave called “buffia” a skeleton lying in a fetal position belonging to the lineage of Neanderthals who lived in Europe between -100,000 and -35,000 years. The interest of this discovery stems from the fact that this skeleton was pretty complete, fairly well preserved and especially that the objects arranged around it, animal vertebrae, flint tips, indicated that it must be an intentional burial.

The National Museum of Natural History in Paris purchased the remains and presented them to the Academy of Sciences as an osteological reference for the knowledge of men of the Mousterian period. They remain so today for the scientific community of paleoanthropologists.

Beaulieu-sur-Dordogne is located on the northern route of the Dordogne River. In the 9th century, during the Carolingian period, it was here that a small farming fishing village called Vellinus was established. On the right bank, the vine covered the sunny hillsides. 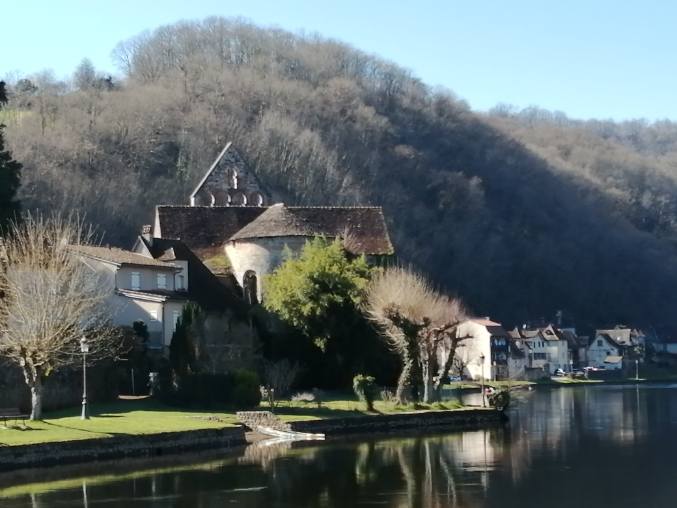 Beaulieu-sur-Dordogne is located in the heart of Turenne. Powerful and opportunistic feudalism, sometimes vassal of England, sometimes of France, was able to guarantee its independence and prosperity during the medieval period. It was the birthplace of one of the most illustrious French families: the Turenne – Bouillon – of Auvergne, until 1738, when the last heir, an inveterate gambler, had to hand it over to King Louis XV in order to pay off his debts.

The history of the abbey

The history of Beaulieu Abbey is intrinsically linked to the genealogical history of this prestigious lineage. Vassal of Charlemagne and first of this noble house, Raoul (or Rodulphe, or Rodolphe) of Quercy, Earl of Quercy and Lord of Turenne, made his estate prosperous. A pious man, he encouraged one of his daughters, Immena, to found Sarrazac (Lot), a priory of Benedictines. As for his eldest son, also named Rodolphe, he offered him as an oblate to the Church. Rodolphe then renounced his father’s estate and opted for monastic life.

In 842, Rodolphe de Turenne became archbishop of Bourges, with the agreement of Emperor Charles the Bald, of whom he was one of the faithful courtiers and advisers. In this capacity, in 845, Rodolphe participated in the historic negotiations between Charles the Bald and Pépin II of Aquitaine in Saint-Benoît-sur-Loire. In 855, while visiting his native lands, he was moved by the beauty of the place and the powerful course of a hereditary property, and he decided to found an abbey whose monks would be responsible, among other things, for praying for the soul of his father Raoul. He brought a dozen monks from the abbey of Solignac – where he had once been a monk and then abbot – who laid the first stones of this abbey named Beaulieu (Bellus Locus), because of its particularly pleasant situation.
Under the direction of his first abbot, Gairulphe de Solignac, the monastery began to organize and soon the first church, dedicated to St. Peter, was built. Around the monastery soon gathered welcome hostels for pilgrims, shops and craft workshops, which gave birth to the city of Beaulieu. Until the end of his life, Rodolphe worked to reform the clergy, including writing a Pastoral Instruction,thus reaffirming the ancient canons whose observance had become very approximate. Pope Nicholas Ier recognized his spiritual influence, which gave him the title of primate of Aquitaines and Narbonnaises and patriarch, in a letter dated 864. Rodolphe died in Bourges in 866. He was canonized.

Thus, at the end of the 11th century, the monastery of Beaulieu became one of the 1500 buildings controlled by the mighty abbey of Cluny. http://www.sitesclunisiens.org/
The growing prosperity of the abbey and the many accumulated riches attracted many lusts over the centuries. In 1076, the abbey was first submitted to the mighty abbey of Cluny, but without success. In 1095, Pope Urban II intervened again. The abbey was then placed under the government of Father Géraud II, from Cluny. Beaulieu then experienced a renewal and a period of great development.

The southern portal of the church of Beaulieu is part of the history of the early 12th century, when the works of the first Fathers of the Church, especially Gregory the Great, found a revival of interest. Father Géraud, who had come from Cluny, knew how to reform his abbey in depth. He had at his disposal the exegetical sources necessary to design the iconographic program of the portal, an incomparable masterpiece of Romanesque sculpture. Opening in the central square of the village where the market was held, its décor contrasts with the simplicity of the entrances reserved for monks. Aimed primarily at being seen by the laity, the portal presents an uplifting iconography: the vices that threaten the faithful, the temptations of Christ, the victory of Daniel and Christ over Satan. The eardrum presents the glorious return of Jesus Christ among men at the end of biblical times in order to definitively establish the Kingdom of God on earth, as described by Matthew (24-25) [Second Parousie]

The rest of the story

At the beginning of the 13th century, the abbey was no longer under clunisian tutelage. Constant conflicts between Beaulieu’s civil administration and the abbatial power became more and more frequent. Gradually, the monastery lost its power. The great plague of 1350 ravaged the region and decimated the monastery. Then came the Wars of Religion. The ideas of propagity through merchants and civil war gabariers between Catholics and Protestants exhausted the city of Beaulieu. On two occasions, the city and the monastery were lalooted by the troops of Admiral Coligny. The church became a Protestant temple. In 1575, it was decided to build a communal hall in front of the south gate of the church, thus conveniently sealing the eardrum for two centuries. At the beginning of the 17th century, a Catholic took over the abbey. Major restoration work was undertaken by the congregation of the Benedictines of Saint-Maur, who now occupied the site.
The church was then decorated with a la Liguewalnut chancel and two magnificent gold leaf retables. The city, once again flourishing, erected its op-ed mansions, notably on the site of the medieval wall that had just been destroyed (St. Rodolphe’s Boulevard of Turenne). Removed from view by the Huguenots in the 16th century, the magnificent eardrum was spared from revolutionary abuses. abolished the Religious Orders and Father Dom Antoine Chevreux, along with many of his monks, died on the scaffold. The abbey closed and the convent buildings were declared “national property”, demolished and sold as building stones. Fortunately, the church, and thus its southern gate, was spared. When Catholic worship was restored in 1801, the abbey became the parish church. It was declared a Historic Monument in 1843 by Prosper Mérimée. 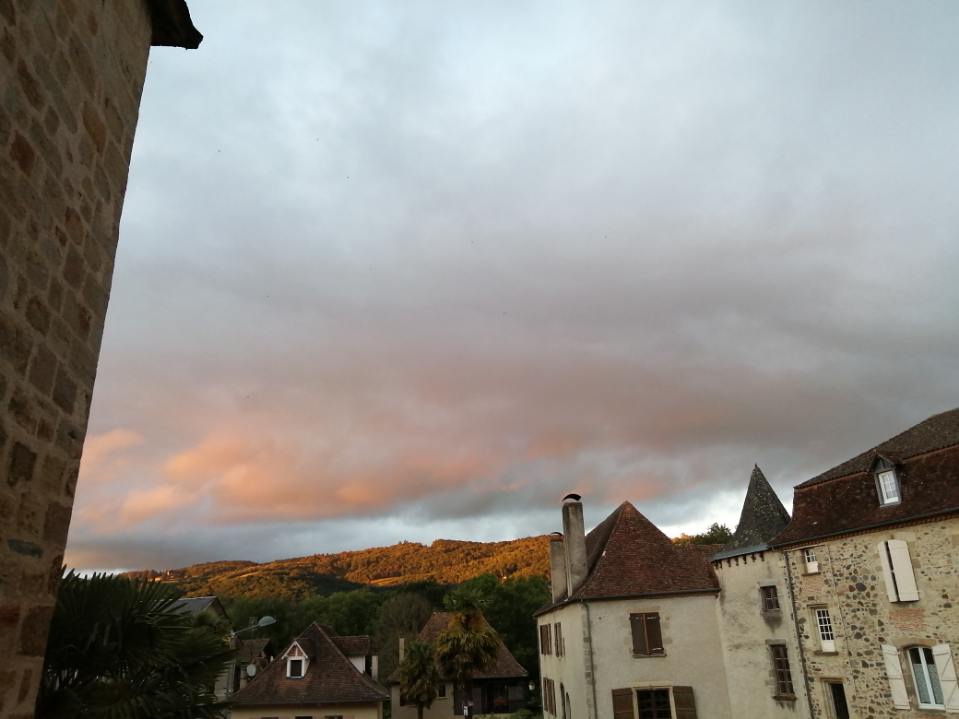